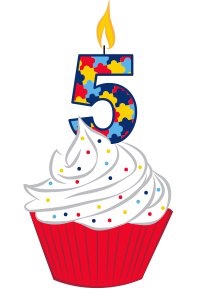 Maybe I’m making it bigger than it is but I feel 5 years old is a big milestone for a child. It’s the transition out of the toddler stage. It’s the year a child is old enough to go to kindergarten. All those big milestones a little child is suppose to reach have been reached. 5 year olds are starting to make those friends that will become their best friends. They are starting to make those memories that they may actually recall when they are a grown adult.

Working in a preschool with children with special needs, we hear parents talk about us getting their child “caught up” by kindergarten because that is when it really matters. When Courtney was first diagnosed and we were signing up for preschool, joe was saying the same thing as some of these parents. “She’s just going to need a little bit of help and they will have her all ready to be in a regular kindergarten class.” I knew differently.

The big 5 for Courtney is on Wednesday. 5 years old! My little baby girl is 5 years old. But here’s the thing. She may be chronologically 5 years old but in every other sense she is not 5 and for some reason, this year more than others, it is hard to swallow.

Most moms get sentimental on their child’s birthday. Another year has gone by faster than you can imagine. Birthday posts of children usually contain the hashtag #growingtoofast or #slowdown. I agree with those hashtags but I also get emotional because a Birthday also reminds me how far behind she is and also makes me feel like the gap just grew some more. It reminds me what milestones she has not met. It reminds me how steep the mountain still is. Courtney has made so much progress the past few years and I am able to focus mostly on that. Though when it comes to a day where most moms get a little sentimental, having a child with significant needs adds some additional emotions to the day.