Describing what it is like to have child who is non-verbal is not easy. Of course it is heart tugging to never hear your child call you, “mommy” or hear the three magical words, “I love you”. That is just heart tugging. That is not the difficult part at all! Having a non-verbal child means not able to know their basic wants and needs. You are living every moment guessing what they want moment to moment, why they are crying, how they are feeling, what they are thinking. Having a non-verbal child means a maddening silence in the car. Before you start saying silence could be nice in the car, I’m not meaning silence with no noises. I’m meaning, no “how was your day”, or “look mommy, an airplane”. Heck, I’d even take, “are we almost there”! Having a non-verbal child typically means more behaviors. It’s hard!

Fortunately, verbally speaking is not the only way to communicate. I am so incredibly thankful for technology. Thanks to technology, Courtney can still have a voice. But it isn’t as easy as just handing her a device and her learning how to talk.

Back in the fall of 2016 we introduced Courtney to a device otherwise known as her talker. The journey with her talker has been long and hard. First we had to find the right system. That took us a while. We were with one system for almost a year and then decided to try another system. We have been with that system for over a year now.

Teaching a child how to use the talker takes modeling, getting everyone on board, training and most importantly time. For Courtney, the progress has been slow. She learned quickly how to use single words to request her most favorite items. That list slowly grew. We started to even see some two word requests. Then with all the medical issues she had this fall, we saw regression. It was heartbreaking to watch. Once we worked through those health issues and made some modifications to her device, she started progressing again.

Within these last couple weeks we’ve seen a beautiful spike in progress! I feel like she is finally catching on to the magic of the device. She has caught on that if she uses it, she can get not only food and toys but get people to do things. She’s quicker to turn to her device instead of using other methods that are not as effective. She’s even starting to use two words together to request items such as pink iPad versus the black iPad.

A couple weeks ago I was so impressed when she spontaneously used her talker to tell me to leave her alone by pressing the picture “living room” and then pushed me away. That was HUGE for her. Here we are, a couple weeks later and she has topped that moment! Her Dad had the day off today. Usually she gets home from school on Mondays and she has a snack with her Papa. Today was different. Dad tried to have a snack with her. Courtney started getting frustrated. She then used her talker to say “go home” and pushed her dad away. TWO WORDS!!! She independently used two words to express what she wanted her dad to do! I was at work when I got the text from her dad telling me this story. I was almost in tears!

My little girl is communicating!!!!! 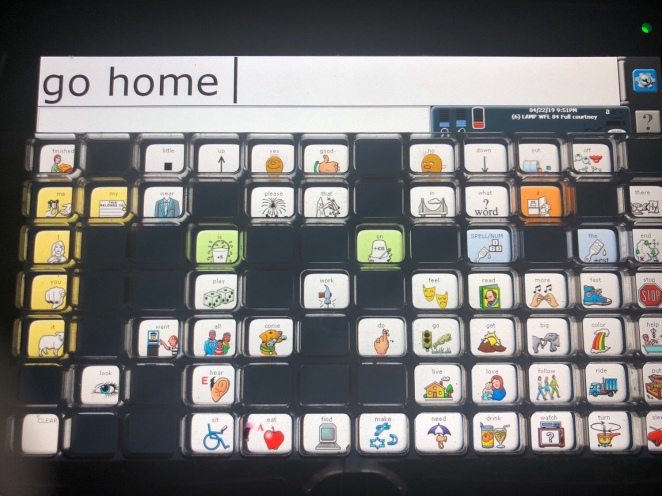