I think the thing I have the hardest time with when it comes to Courtney is her struggle with peer interactions. I think I struggle even more now with it than ever as I watch Alyssa make friends and talk about them on a daily basis. Now Alyssa’s friends are mostly her cousins and then her friend Kayla, but she asks for these friends daily. Does she ask for these friends daily because she doesn’t have anyone playing with her at home? For the most part, Alyssa and Courtney do their own thing when playing at home. Alyssa is usually making up the cutest play schemes in her kitchen or with her princesses and baby dolls while Courtney is in another room labeling colors, numbers and animals or looking through books. They do occasionally like to rough house with each other which I always enjoy watching. I do work on them playing next teach other but it’s usually short live.

I love the bond that Alyssa has with her cousins but when I watch them play together while Courtney is doing her own thing in the other room, my heart breaks. I want Courtney to have that same bond with her cousins AND her sister. I know Alyssa and Courtney have their own special bond and nothing will ever break that.

I have to laugh…at the end of last school year and the beginning of this past school year when I addressed my concerns about her placement in a blended room, I explained to her team that Courtney sometimes struggles with playing even in the same room as her sister and cousins. I will never forget the principals quick response on how magical the transformation will be after she spends some time in the blended room. She told us we will be surprised how Courtney will now want to play with other kids. Well principal, I’m still waiting! Yes, I’m fully aware that it takes time but that wasn’t the way she put it.

Our home therapy is working on Courtney playing with Alyssa. When possible, Alyssa gets to join in on the therapy session. Right now they are working on increasing the time Courtney and Alyssa will engage in parallel play, meaning the two of them sitting next to each other playing but not necessarily interacting. With time, she will get there. I know I have to patient until she does. I have to remember they do have a special bond in the mean time. 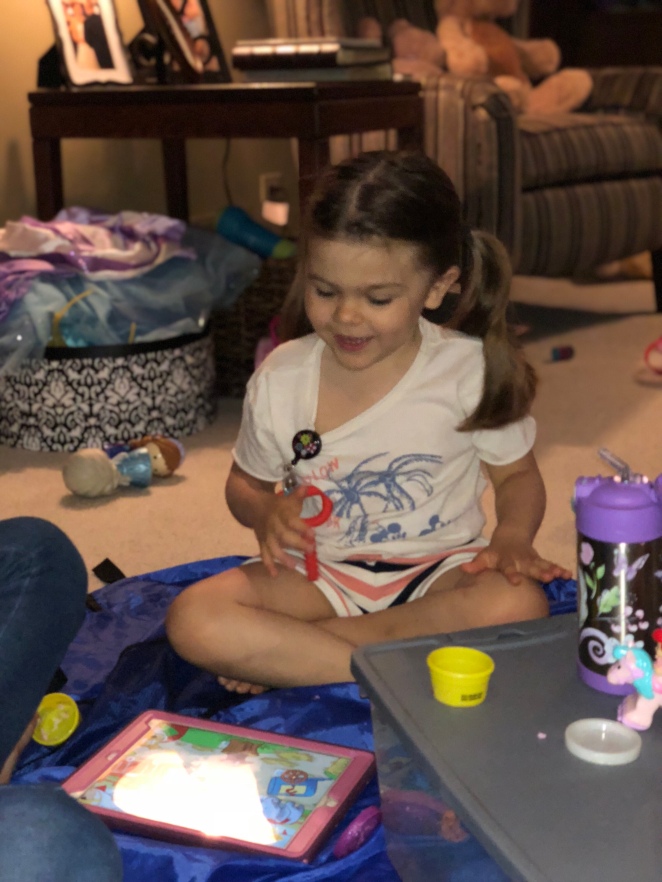