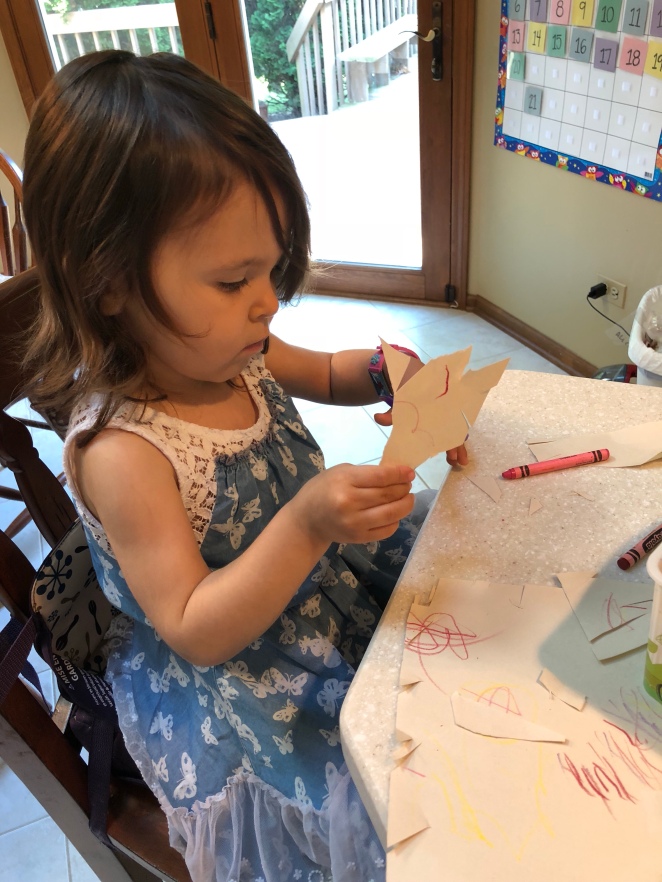 I had so much fun today just watching Alyssa as she enjoyed some Arts and Crafts time. She insisted on doing some cutting since she saw me cutting a project for school. I gave her some scissors and she of course initially fought off any attempt I made to show her the proper way to use them. She did eventually let me show her where her fingers go and she started snipping away. She snipped with so much focus. And with each snip, her concentration grew. I then watched her put the scissors down to color her little snipped papers so delicately using the perfect grasp. My special needs warped mind didn’t realize 2 year olds could hold a crayon correctly! Then it was so cool to see her figure out on her own how to hold the scissors correctly once she decided to start snipping again. I was just in awe of my beautiful little girl as she independently created her beautiful masterpiece of snippets of paper some of which had colorful circles on them.

This terrible two stage is hard! Since developmentally Courtney isn’t two, this phase is completely new to me as a parent. Alyssa can go from a sweet little princess to a holy terror with horns and then back to a sweet princess in seconds! And yes, I’m well aware that 3 can be even worse!!!

The one thing I’ve noticed is some of her tantrums are happening when she’s just trying to navigate her way around this world of big people who are constantly telling her what to do, and how to do it. Big people who want her to be independent but when she actually tries to be independent we get in the way. A world with so many rules to follow but still too young to truly understand what these roles are and why she needs to follow them. A world with so many cool things constantly tempting her but having to learn that she can’t always have instant gratification. That’s a lot to handle as a little two year old! Unfortunately, like a lot of parents, I am consumed by so many things through out the day so when Alyssa throws a fit or gives me attitude, I tend to forget to respond calmly and end up fighting a fire with fire which is a recipe for disaster (aka toddler meltdown)!

So today during this arts and crafts moment, I just sat back and watched. Yes, she was making a mess and yes, there were times she wasn’t holding the scissors right. There were even a few times I thought we were going to lose a finger. But what was also happening was this beautiful little girl proudly completing a project all on her own and the best thing I could do for her was just let it happen.